I've heard good things about using printable coupons to cut one's grocery bill, but apparently it only works as a saving strategy in households where pre-made convenience foods, scent masking products, and extremely branded cereals are the areas where the grocery budget is being bled dry. The coupon sites I looked at were just as pathetic as the coupons one encounters in the newspaper - a dollar off cinnamon buns in a tin... fifty cents off Glade Plug-Ins... and lots more shit I don't need. And for the most part, I can't imagine most people need any of it, so I'm assuming that's how companies get people to buy it. The consumer sees that they can have X for a dollar less, suddenly desires X, and never even realizes they could get a product pretty much equal to X under the store's umbrella brand for two dollars less. Not to mention that in many circumstances, a person can make homemade X for pennies. GENIUS.

Funny: I check my friend page every now and again when I'm trying to avoid working, and I was getting kind of sad because no one ever wrote anything. Then I realized that I've been logged out since I got my new computer! So I logged in, and now I see that you're getting jobs! Naming babies! Being queens! Taking tests! Peeing standing up!

And here I am, not posting here and running giveaways at my Babby blog. So I'll read about your life and you go enter my giveaway. Kiss, kiss, hug, hug.

Yeah, that's right - I'm running yet another giveaway, this one at Manolo for the Brides. And while my CSN giveaway over at IKHIBF is getting good lovin', the Social Coutuer one ain't. I'd appreciate it if you'd take the time to enter one or both - the CSN gift cert can be used for pretty much anything, and Social Couture carries sweet tableware, party supplies, and stuff.

I'm hosting a giveaway over at the Babby Blog, so enter if you want to win a $40 that can be used at any of CSN's 200+ stores. They have some unbranded stuff, but it's mostly pretty sweet gear (housewares, baby and kids' stuff, bags, outdoor gear, decor, etc.). Entering only costs you a minute of your time, and it makes me look good! Gracias!

Or more specifically was returned to us by the person who lives immediately in back of us. Oddly, she was the one person other than our immediate neighbors that Tedd had a chance to talk to over the weekend. It just happened that she saw Justine looking hungry and sad in her yard, and Justine (who must have been very, very hungry) just happened to be feeling friendly enough to take treats from her and then let the woman put her in a cat carrier.

Because those who know Justine know that she's not exactly a happy-to-be-picked-up, lap-friendly sort of pet. In fact, she uses sweetness to lure in unsuspecting people so she can scratch them.

All of the how to find your lost pet guides I read were right in that Justine was close enough to hear us calling and maybe even to see us when we went behind the fence, but didn't come out of wherever she was hiding. Even though Paloma, Emily, and I walked by that house about eight times today. The rain didn't help, either. She probably spent the past four days under our neighbor's porch or something.

Anyway, yay! YAY!! Justine is home, and now all I have to do is call up animal control and the closest shelter where I filed lost cat reports and let the microchip people that they can take the flag off her chip number.

One of my five cats, Justine, somehow escaped the house, maybe Friday, maybe Saturday. We don't know. She usually hangs in the basement, doing her own thing, so we didn't immediately notice her absence (guiltguiltguilt). Our next door neighbor thinks she saw Justine on Saturday, but we haven't. Thus far, we've left the shed open - it's raining - and put out food - which was eaten. We're going to start calling shelters and vets and putting up signs, I guess. Justine is chipped, so if she's picked up by a shelter we're good.

But is there anything else we can do? 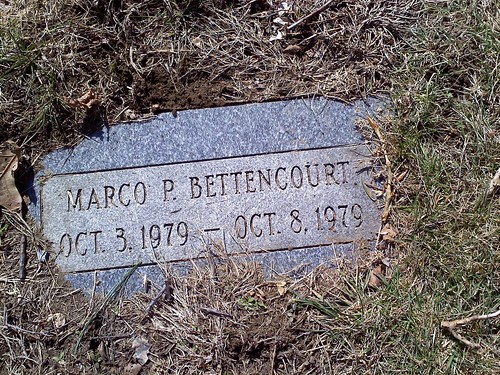 And sometimes the cemetery is really fucking funny: 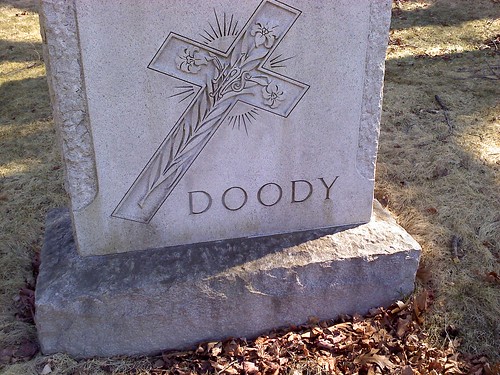 Tedd and I have embarked upon an indefinite spending freeze. We can pay the bills. Buy food (but nothing too fancy or fun). And solve health or home problems as they arrive. We cannot, say, go to a restaurant or take the baby to the play place or buy ourselves a present. We have, however, had great fun talking about what we'll buy when the spending freeze is over. At least once per day, one of us will say to the other "When the spending freeze is over, I'm going to buy X!" Funnily enough, less than an hour later, we've usually forgotten what it is we wanted so badly to purchase.

This has led me to a bit of self discovery. The two things I apparently really truly do want enough to remember I want them are:

1. Write down the novel I have fluttering about in my head before it flutters away. It's been there for a while, and I fear it'll move on soon.

2. Possibly conceive again, all conditions being right. Looks like the start date for attempting this endeavor will be August.

3. Work a bit less and have more fun. Really, I ought to write "Make more money" here, but the fact of the matter is that I'm not getting any younger and I don't want to be that person who just works and works and works.

4. Get back to dancing, either tap or partner dancing with Tedd. I really enjoy both these activities, but to realize this one the money will have to be there for it.

Go check it out and have your say!
Collapse